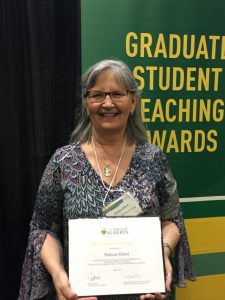 Dissertation Title: “This little collection of rubbish”: A Biography of Lady Charlotte’s Fans

Fans have been used globally for over 5000 years for practical reasons, like winnowing grain or signaling military personnel. They have had communicative power, as symbols of religious chastity, or as a means of expressing political leanings. Men and women used fans to cool themselves before fans became feminine fashion accessories in the 16th century. Thereafter, fans were ubiquitous in women’s wardrobes until the late-Victorian era, when fan use began to wane in most of Europe and North America. Simultaneously, their attraction as collector’s items increased. Fans lost some of their traditional meanings by evolving into collectible artifacts but gained others. This thesis traces the changing meanings of fans as gendered material culture, and the gendered practice of collecting within Victorian society, through an exploration of a highly regarded fan collection gathered during this era.

Lady Charlotte Schreiber (1812-1895) pushed the boundaries of gender, class, and social expectations in many areas of her life, including amateur fan collecting. The Lady Charlotte Schreiber Collection was donated to the British Museum in 1891. It contains over 700 mounted and unmounted fans, making it one of the most significant collections of fans in the world. While many other collections consist of the elaborately decorated fans used by aristocrats or royalty, most of the fans in the Schreiber Collection are inexpensive, printed paper fans. Their depiction of current affairs and scientific discoveries recorded history as timely as any newspaper. Their ephemeral quality made them affordable to, and popular with, the masses. Their survival is due to Lady Charlotte’s foresight and tenacity.

Lady Charlotte is a central figure in collecting. While her ceramics collection has been written about extensively, her fan collection has received little attention. Lady Charlotte’s writings and the fans she collected are important historical documents. Their analysis will enrich the interpretations of the history of collecting, the changing status of fans in nineteenth century material culture, and Victorian understandings of gender and class.

Publications and other research contributions: